How was you week?  It was good. A little long and sometimes irritating because we visited the same people so many times. My companion thinks we have to visit the members every day it feels like, and he always says he doesn’t have money but that’s not my problem we actually have the same amount. So he also thinks you only have to eat one meal a day and then he is always sick. I don’t understand his reasoning but I think that I will be able to get him to eat 2 or 3 meals a day. He always says he is sick and can’t have much food so the members give me more and then when I turn my head I have a ton of rice because he doesn’t want to eat it. I’m not complaining because I like the food but it is really different.   Oh, we get more money in 4 days so we will be fine, I just don’t want to spend my own money. I seem to take my money a long ways. I have been able to buy cereal, milk and pasta for a few nights, cookies, sugar, bread enough for me, my comp says he doesn’t have any money it all comes down to keeping track of where and what you buy. I have been buying the cereal in 1.5 kg bags for 160 lempira it should last a couple weeks. It is just standard corn flakes so I add some sugar. 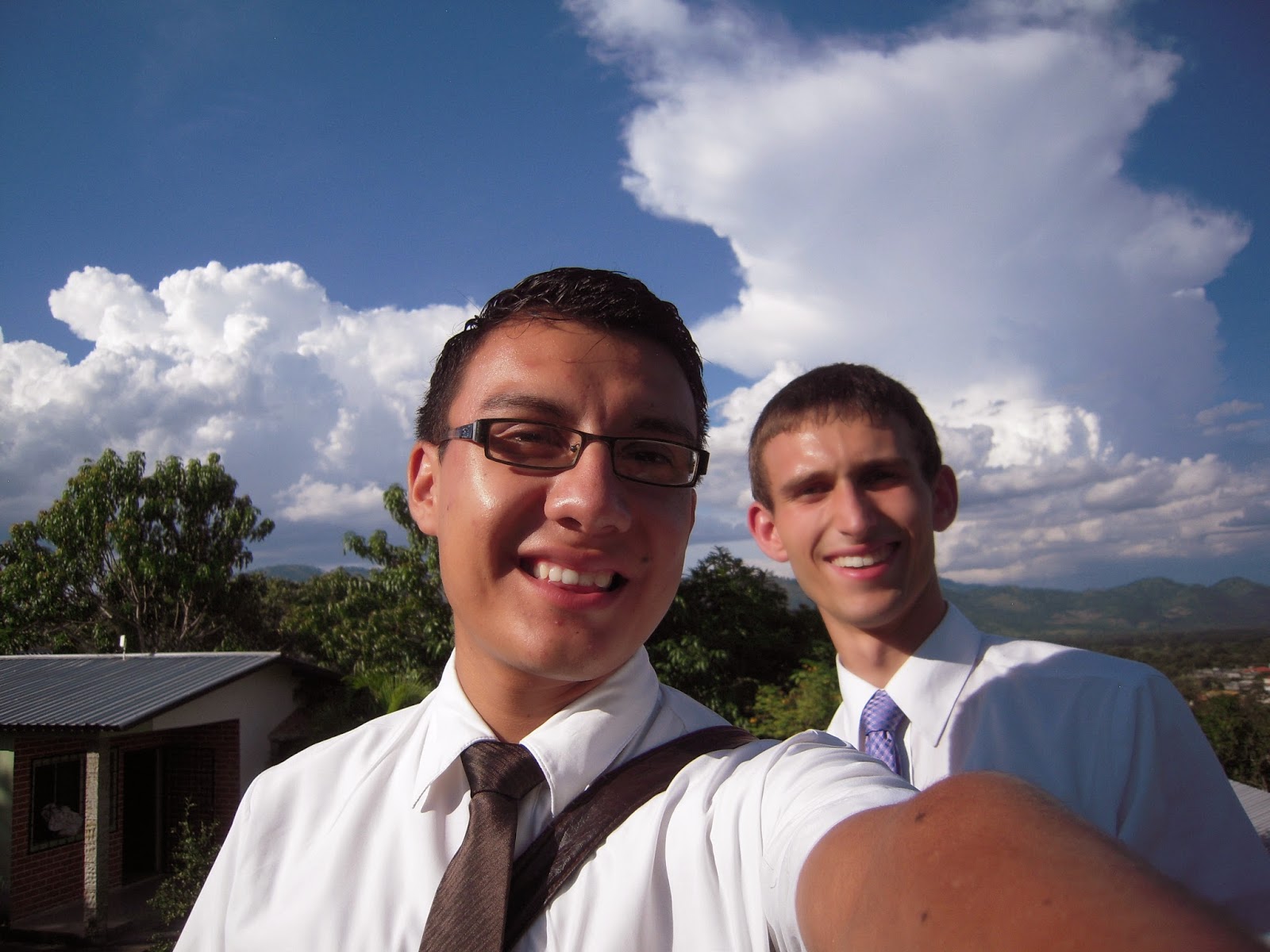 Grandma wants to know how people bake things, you said that many people have small bakeries?
Many people have small electric or propane ovens. We don’t have an oven in our apartment. We have a bakery in Copan it is called the Popolar, I think I am not positive, this is where we get most of our breads from. Other than the tortillas, everything is made here.

What service did you do this week?
It was raining hard and some sort of dam broke. I have gloves but they were so wet you got pruned hands so most of the time I worked without gloves for most of the time. We dug a drainage ditch in front of a house that was about fifty feet long and in some places about two feet deep. We then took down a barbed wire fence. During this, ants attacked me. I literally had ants in my pants and they were painful, but all is well. Wow that was a lot of mud.  How did the washer end up in the street?  Someone carried it. Everything was destroyed and up stream a lot of people died. We don’t live in a flood zone so we are good. We also de-kernelled corn, when we went to one of our lessons and they were taking the kernels off of dry corn, this was easy but I had a blood blister on my thumb when finished. 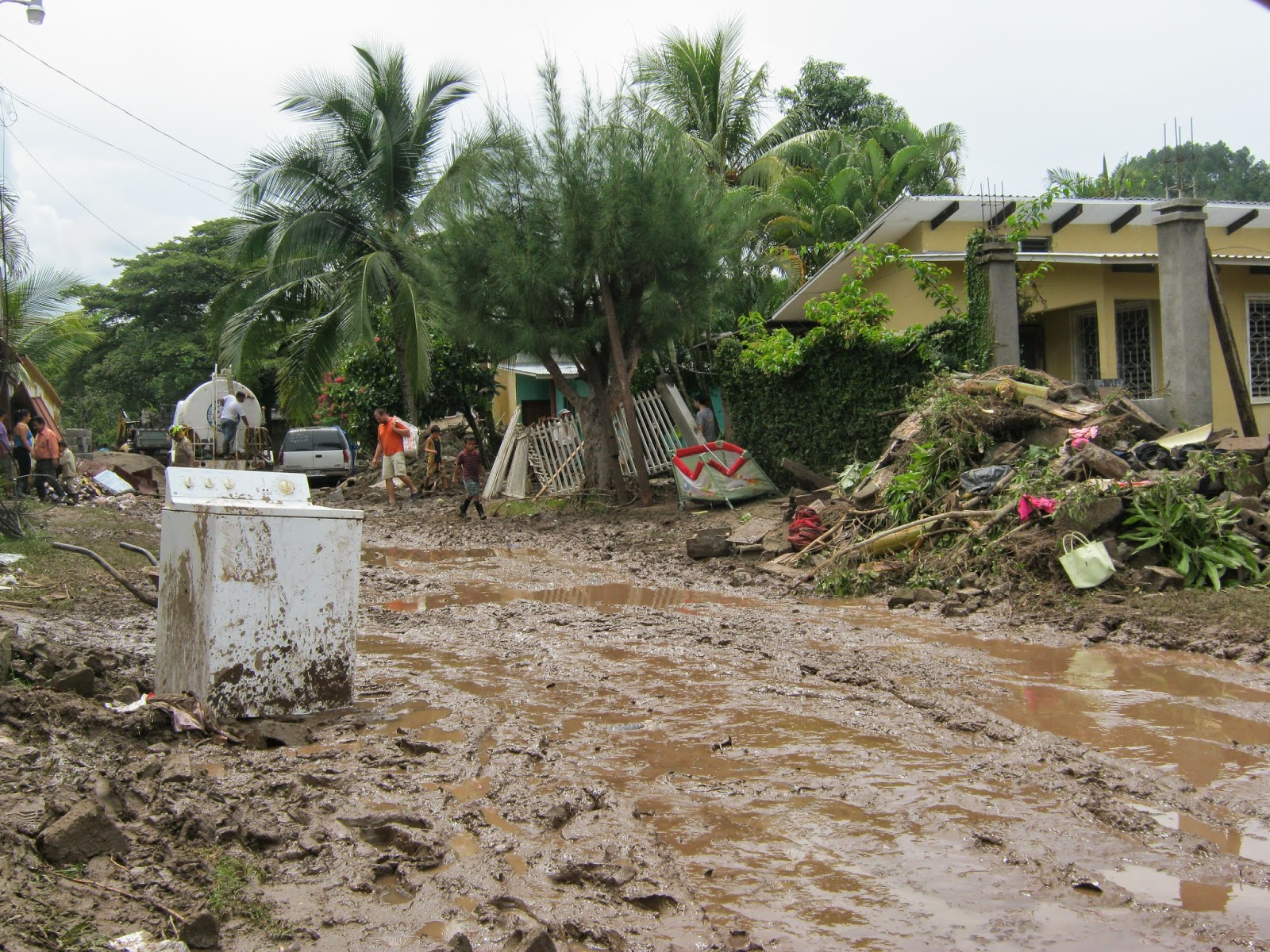 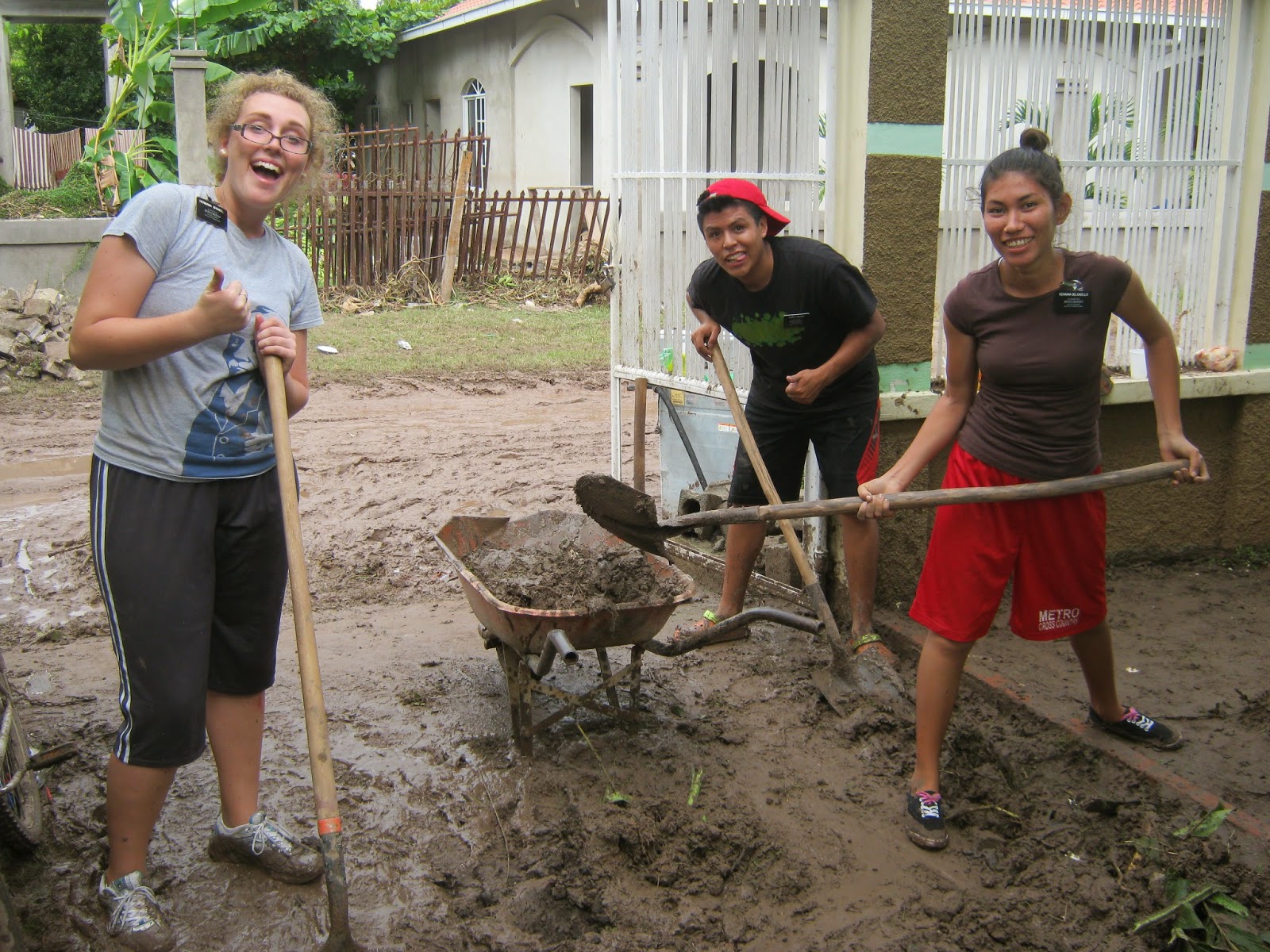 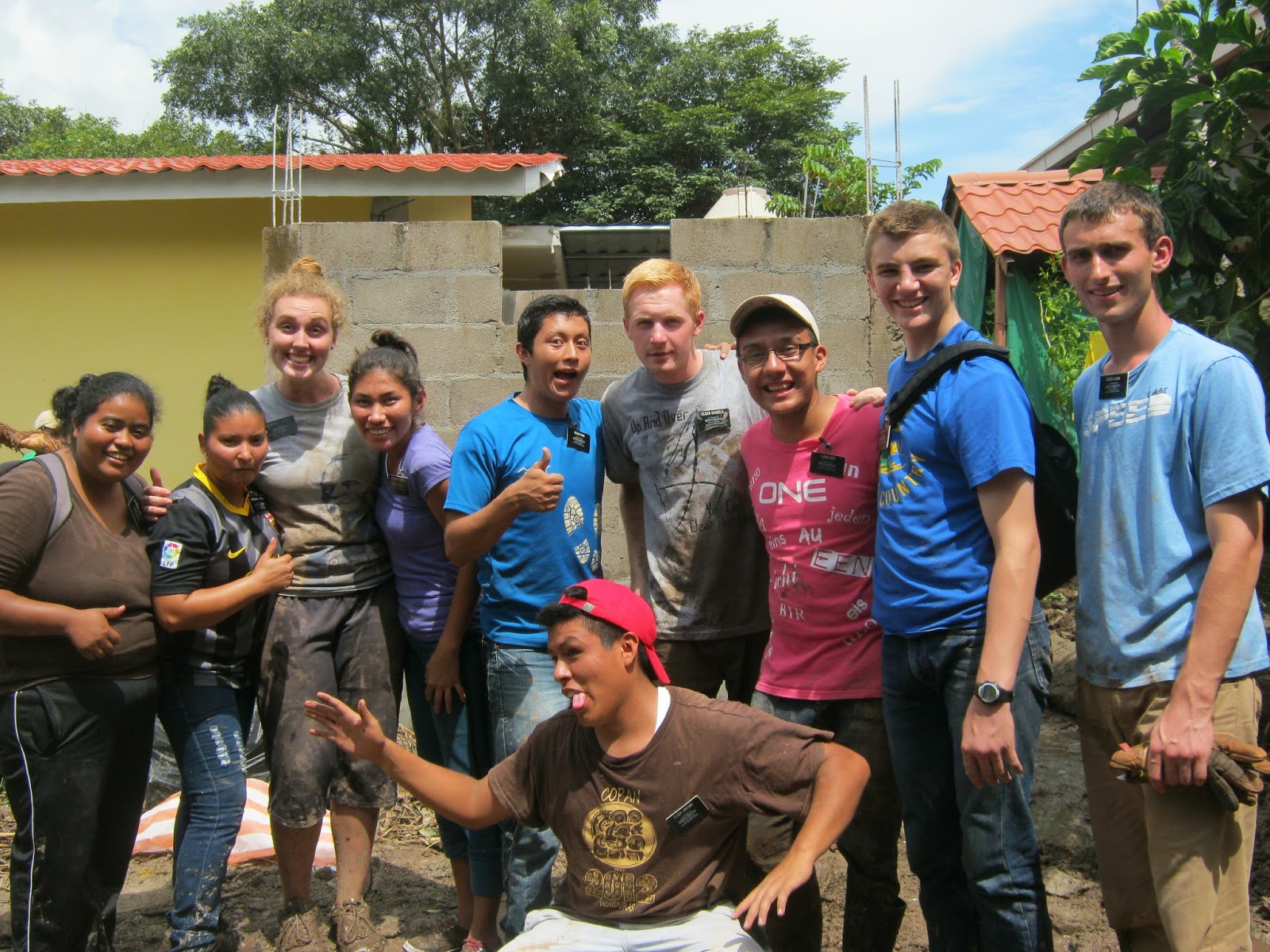 What was the spiritual experience this week? I think that it would be teaching the M. family. They were way receptive to what we taught and their kids really wanted to participate.   It was interesting to see how the lord provides people that he has prepared. They didn’t come to church this week because the parents were working but hopefully next week.

This week we dealt with a lot of drunk people. Yesterday we went to a house that we had a scheduled visit with, and the dad was drunk. They really didn’t even have a house, it was more like a hut, but they were living there, dirt floor and all. We talked to him and we stepped inside the awning thing and the man grabbed our hands, it was really awkward for my companion and me.   The man was speaking Spanish that was not understandable to anyone. We were stuck there for like 15 minutes until we finally convinced the man to let us go. His family was just looking at him like he was crazy, and he really was. So we went to our next visit, which happened to be about 100 feet away from this drunk guys house, and there were people there doing work on the power lines, like putting a new line to the house. So the drunk man picks up the ends of the wire and try’s to spark them. There wasn’t power; just to see him try and do this stupid thing was very weird and funny. But it really emphasizes our agency. We loose our agency when we drink or do something like that.

Our next experience we were talking to a man and a drunk man came around the corner, he told us where he lived like 1000 times and whatnot. We were talking to another man and asked him who lived in the house we were contacting, and the drunk guy invited us in to someone else’s house, very awkward. The owner of the house then locked the gate and the drunk guy glared at us. My companion pulled out a pamphlet of the word of wisdom and gave it to this man. He opened up to the first page, which has a picture of fruit, and he said, “We can only eat fruit”.  We then left.

How did the branch president’s wife do with your wash?
The clothes were very clean. I learned that you have to have your socks turned right side out or the dirt won’t come out.

Have you found any investigators?  We have found a couple families and a few individuals. We have 20 new investigators from the past two weeks

How many people are active in the El Dorado branch? Is the church in a field by itself? By Google maps it looks that way?  No the church isn’t in a field by itself; it is kind of but there are buildings that are on one side of it. We live near the church. The attendance in the branch this week was 86 people, there are tons of inactive members and we are trying to reactivate them. We had one investigator come to church this week we were happy. His family is already members, but he is not.   His name is H. O. 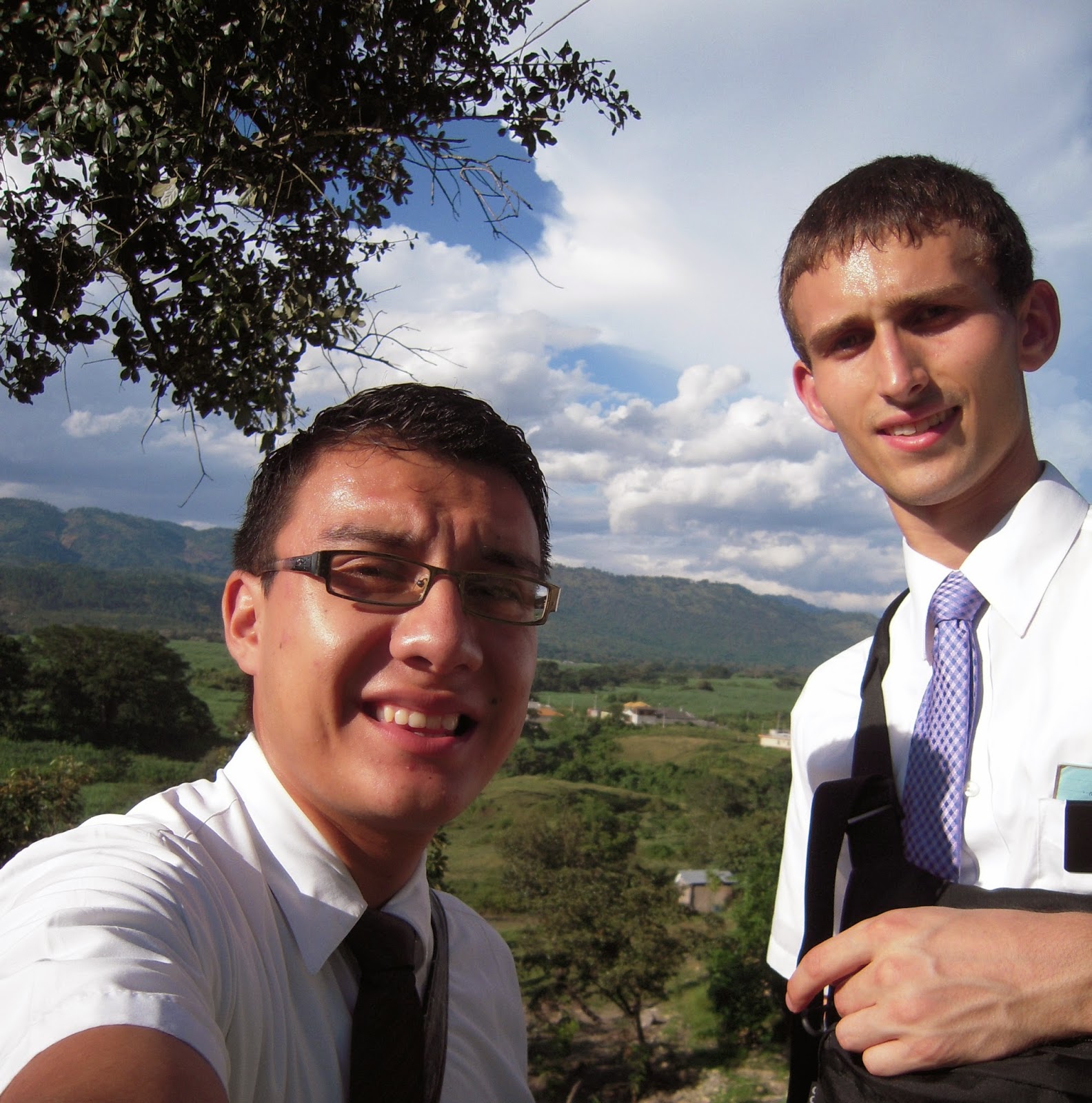 How has the weather been?  Honestly the heat hasn’t been that bad. At night I have to sleep with the scrub bottoms and soon I will be wearing socks and possibly a shirt it is really cold at night and in the mornings. Its not that cold I just need to wear more clothes when I sleep. I always try and keep well covered. We have a window in our room that doesn’t close an the screen has a big hole in it so I get bit by some bugs at night even though I apply mosquito repellent.

Yes we have a phone. For p-day we went and climbed a mountain. This was fun. We took a lot of pictures on top We got to the bottom of the mountain after a 2 mile hike and my companion remembered that he had left the phone and the keys on top so we had to walk back to the top of the hill to get them. 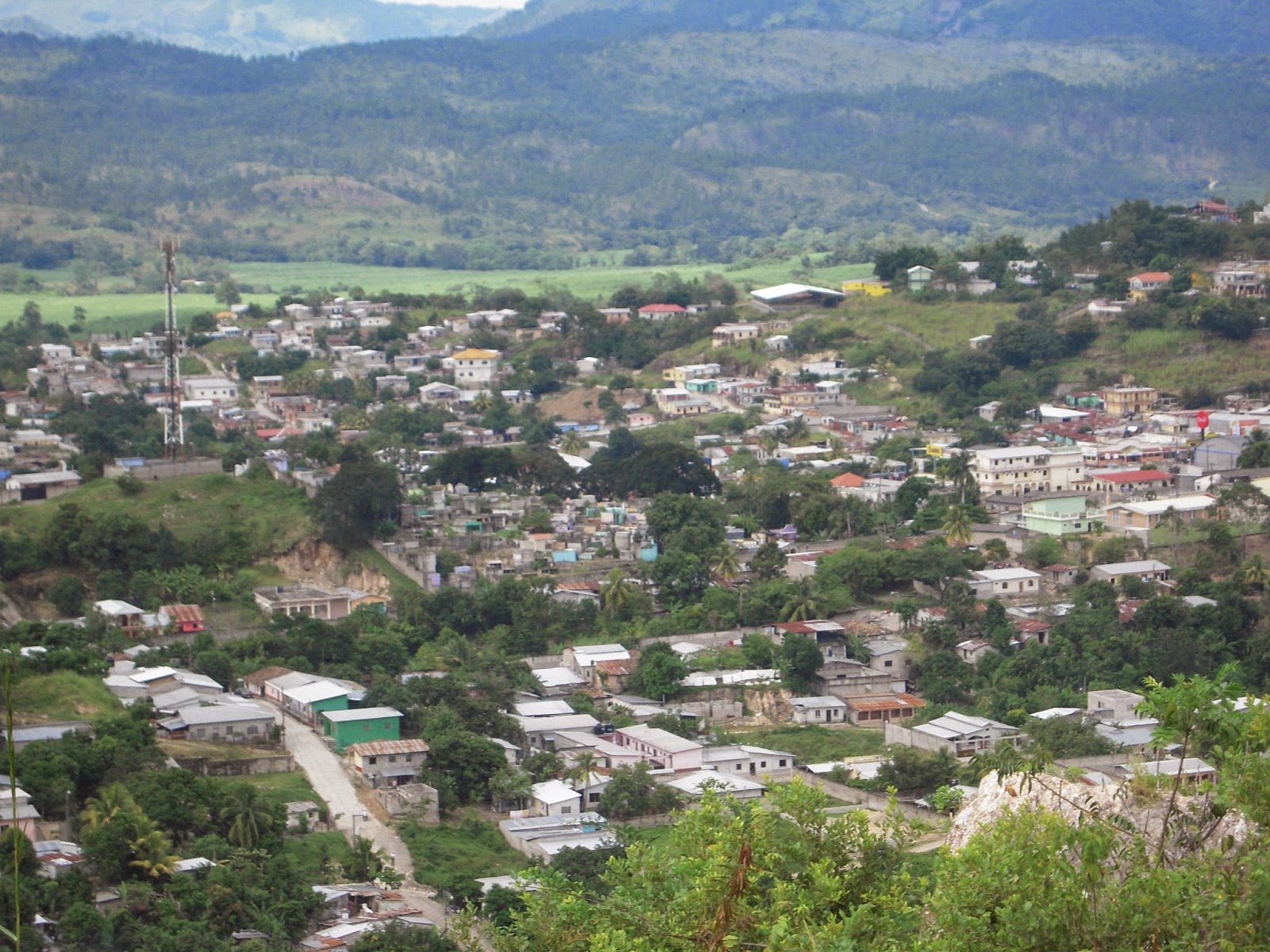 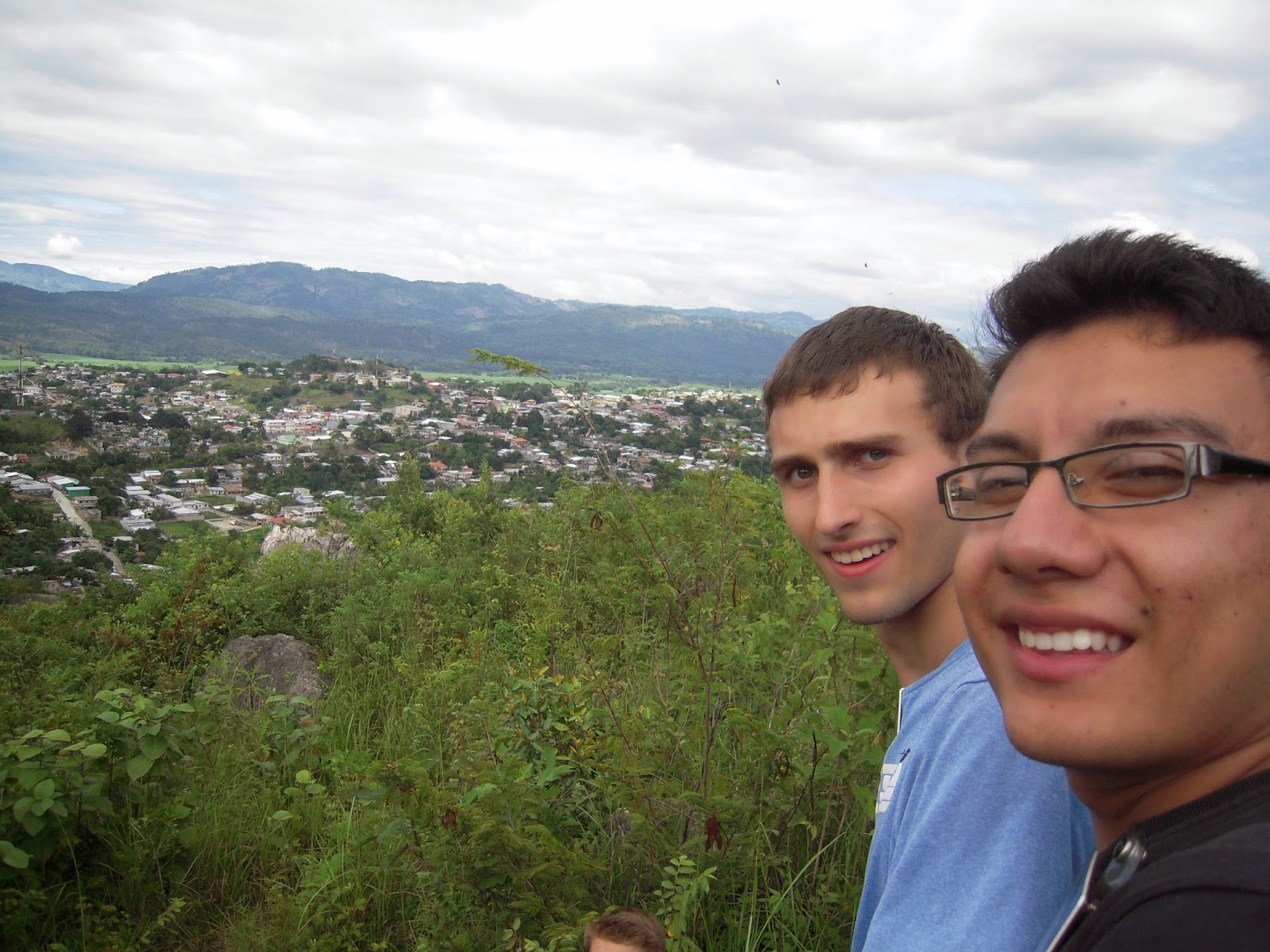 How is your apartment?
OH it is fairly clean compared to the others I have been in, I sweep every couple days and I cleaned the kitchen and the shower this week.

Have you seen any monkeys or macaws?  No monkeys or birds other than people’s pets. There is so many dogs here it is out of control. I think we have a stand off with a dog or two daily.  Have you bought a slingshot?  No we have our bags we could peg them with. None have charged us yet, we just face them and back up slowly. Some day I will peg one I am sure of it.

How was church this week?


Church was good but priesthood was terrible because they tried to ask me questions and I couldn’t tell where the questions started.  The language will come.  Yes I know I have no worries with this. I just need to get over my fear of talking to random people and be able to carry on a conversation.   My companion is always saying, “be patient” when I ask a question, and then he never answers.   The universal response can’t be “be patient” like what are we eating for dinner. “be patient”, it is irritating sometimes.  OH I forgot I gave two blessings this week. Also we ate lunch on Sunday at Hermana D. S. house she claims she can’t cook but it is always the best food. She always has homemade juices so I look forward to that, this week she had orange carrot juice. She owns a little clinic. Well it is in her house, and she really doesn’t have that much. But one person she knew cut their arm really bad and cut a vein or artery, I am not sure, and she said she sewed the blood vessel back together, so that was good.
Posted by Daleen Olsen at 2:53 PM 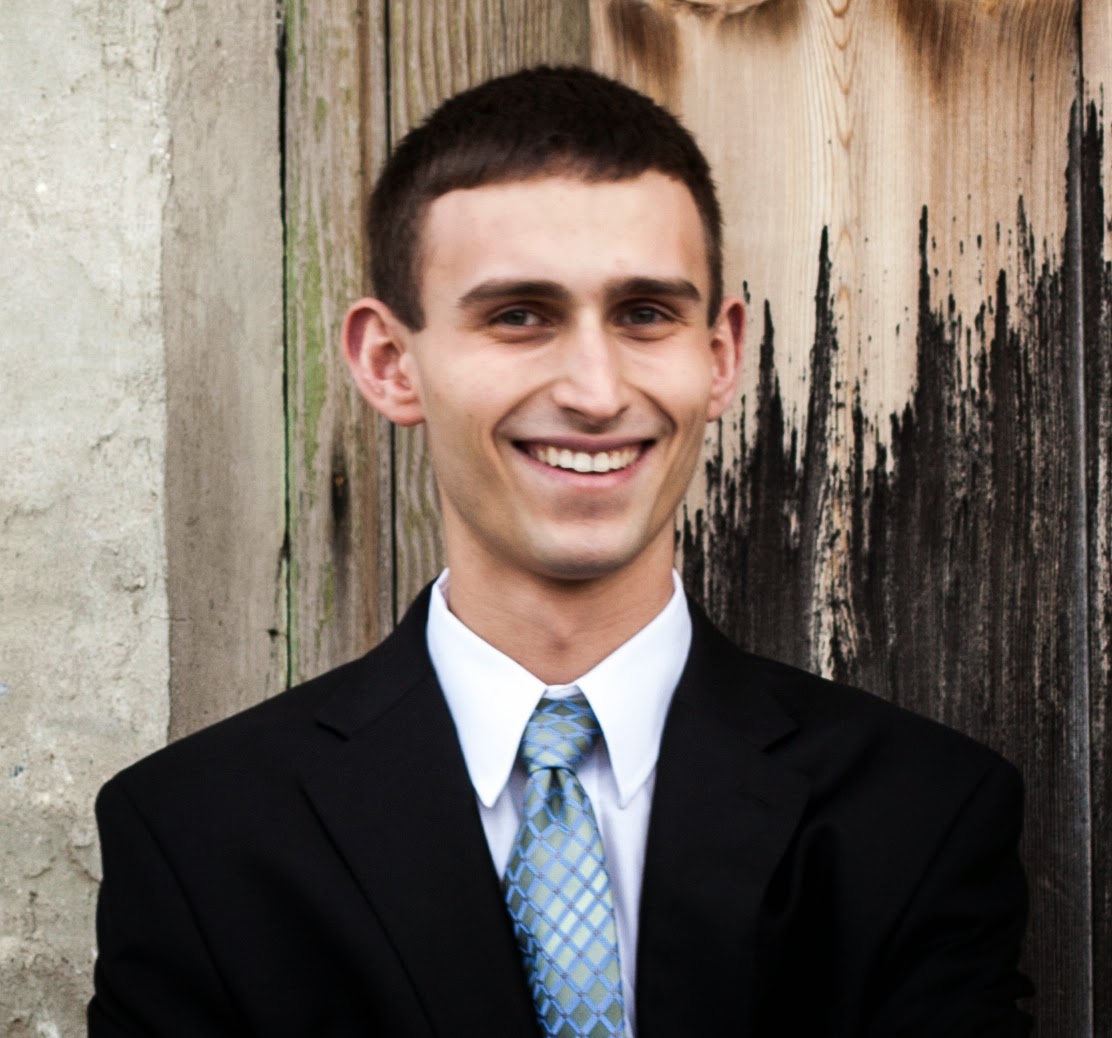